Eublepharis fuscus Börner is a leopard gecko species widely spread in western India. Possibly its natural range extends to southeastern Pakistan. The specific name "fuscus" means dark or dusky. The range of the species lies within Western India (from the Kathiawar peninsula, Federal State of Gujarat in the North up to Poona, Federal State Maharashtra in the South) (Seufer et al., 2005; Harshil, Vyas, 2019).

Eu. fuscus total length (including tail) is about 25 cm (9.84 in). These geckos have a slightly thickset appearance with strong and robust body. The head tapers towards the tip of the long snout, the back of the head is wider than the neck. The rostral is hexagonal and twice as wide as it is high. The mouth shield (mental) is small, hexagonal and wider than high. It is about twice as long as the first pair of postmentals. The mouth shows seven to eight supralabials and eight sublabials. 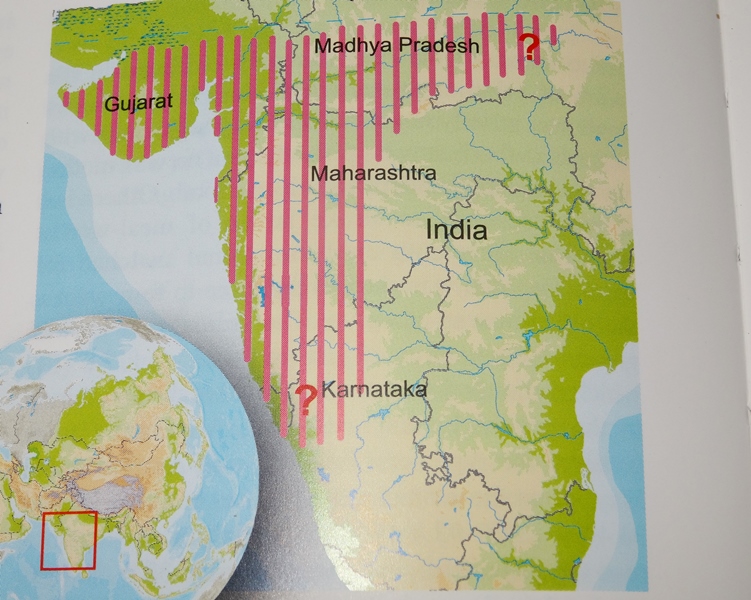 From the front towards the back, the supralabials decrease in size. Eyelids are well-developed with the upper one grown wider than the lower one. The front part of the forehead has smooth flat scales. The external ear openings are deep. Large, smooth granular scales and tubercles cover the head’s sides behind the ear-drums, the forehead’s middle and entire back. The tubercles are narrower than the space connecting them. The scales on the back are smooth,

hexagonal and situated next to each other, and just so are the scales on the throat and the belly. The tubercles on the back are clearly visible and have pointed ends. The gular scales are smaller than the scales on the chest and belly. Across the center of the belly, between the lowest of the lateral rows of tubercles, 42 rows of scales can be counted. Number of preanal pores is from 8 to 16 with missing femoral pores. At the base of the front legs, deep axillary pockets are situated. The front legs are short and the hind legs are just moderately long. The bottom of each short, slim finger and toe is equipped with one row of smooth subdigital lamellae (e. g. 22 lamellae can be counted at the bottom of the fourth toe). All fingers and toes end with short, bended claws. The tail is shorter than SVL; the ratio of the length measured snout-to-vent to that of the tail is 1:0,6 (Seufer et al., 2005; Mirza et al., 2014; Vyas, 2007).

The head of adult animals is decorated with a netlike pattern, consisting of reddish brown to dark brown spots on the light brownish yellow basic color. The lip shields are of a light brownish yellow and not spotted. There are dark spots of the back’s middle. The dark brown color takes up more space all in all than the light brownish-yellow basic coloration. The second dark horizontal band on the back shows a pattern similar to that of the first one. The tail shows an alternating pattern of wide bands in a yellow brown and bands in a light brownish yellow. Both the coloration and patterning of Eu. fuscus are very typical and are neither found in any other species of Eublepharis nor in any other eyelash gecko (Seufer et al., 2005).

Eublepharis fuscus can be differentiated from Eu. macularius in possessing smooth (as opposed to tuberculate) median scansors on the toes, mentals longer than wide (vs wider than long), a single (not two) broad pale dorsal bands and eight (vs six) postnasals bordering the nasals. It differs from E. hardwickii in possessing middorsal tubercles that are smaller (vs larger) than their interspaces, these tubercles also differing in shape, being conical in Eu. fuscus and flattened in the east Indian species; and variegations within the pale bands on the dorsum of the body (absent in Eu. hardwickii). The western Indian species differs from Eu. angramainyu in showing a blotched (as opposed to a linearly-arranged) pattern on the dorsal surface of the head and body, head covered with flat (not convex, polygonal) scales, eight (vs 10) supralabials and mentals longer than broad (vs twice as broad as long), besides being substantially ( 67 per cent) larger (SVL 252 mm) than the west Asian species (170 mm). Finally, Eu. fuscus differs from Eu. turcmenicus in showing tubercles on the dorsum that are smaller (han the interspace (vs equal to the distance between (hem), rostral twice as wide as high (vs one and a half times wider than high), a more robust habitus than its west Asian congener; a dorsal body pattern that consists of dark blotches (not partially with a linear pattern) and continuous preanal pores, (preanal pores interrupted medially by one to four scales that lack pores in the congener from Turkmenistan) (Das, 1997; Srinivasulu, Srinivasulu, 2013). 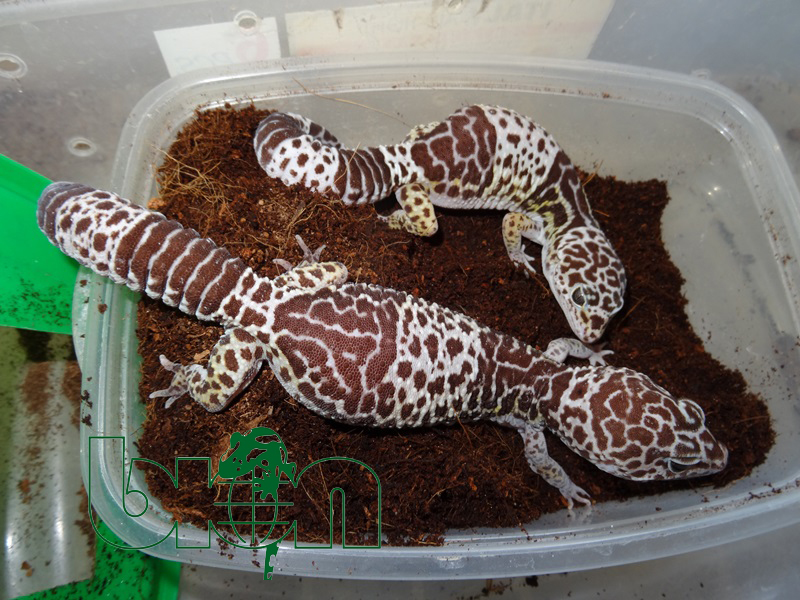 Like other leopard geckos, these ones are crepuscular being the most active at dusk after sunset and in the first part of the night. At day they usually rest in their shelters. It can be found in forested hill tracts, scrub, boulders and scrubland between 50 and 650 meters a. s. l. (https://www.iucnredlist.org/species/172683/1366357).

It feeds mainly on arthropods, however sometimes consuming small vertebrates. Juveniles are quite aggressive and can make screaming and grinding sounds to scare away a potential threat. At the same time, they rise on all 4 paws and make sharp lunges towards the enemy. Adults sometimes behave this way and can bite. Autotomia (dropping a tail) is also commonly observed for these animals when they have no other way to escape from a potential threat. With a sharp rough capture (mostly wild individuals) they can release excrements and wrap their tail around the arms of the person who took them.

Keeping. We keep adult males and females separately, in pairs (1.1) or breeding groups (1.2 or 1.3), at 90*50*50 cm 35.4*19.7*19.7 in) horizontal terrariums; babies are kept only separately at terrariums of not less than 30*30*45 сm (11.8*11.8*17.7 in). A spacious humidity chamber that serves as an oviposition box as well is placed inside a terrarium It is a plastic box with a 5-6 cm (1.9 – 2.4 in) layer of coconut substrate of medium humidity. The box is covered with a cap that has a hole drilled in order to let the animals in and out. Paper is used instead of substrate. Well-compacted clay layer of 2-3 cm (0.8-1.2 in) can also be used as a substrate. Water dish, a bowl with calcium powder (without D3) and a thermometer for temperature control are obligatory. Several shelters should be provided according to the number of animals. We use pieces of hollow bamboo trunks.

Lighting. Zoo Med 5 UVB lamp is used during breeding season for 14 hours per day, and for 10 hours per day at other time before period of winter dormancy; during resting period (2 months) for 3-4 hours per day.

Humidity. Humidity is 70-80% both for babies and adults with double spraying during the day.

Diet. Diet for adults contains Turkestan cockroaches (Shelfordella tartara), and crickets (Jamaican field crickets (Gryllus assimilis), house crickets (Acheta domesticus) and Mediterranean field cricket (Gryllus bimaculatus). Sometimes we offer pinkies. It is strictly recommended not to use wild caught insects. Sometimes if an animal is still hungry we can offer one or two additional feeding items. We gutload the insects with fruit, greens and vegetables and sometimes bee pollen as an additional source of vitamins and bioactive elements.