The Toad-headed agama (Phrynocephalus mystaceus) is one of the biggest species of Phrynocephalus genus, with an exciting appearance and notable behavior. Among more than 40 Phrynocephalus species, these animals are still not common in collections. Thus, there are a lot of unexplored shades in their biology and ecology. In this article, we’ll try to give general information of the toad-headed agama (Phrynocephalus mystaceus). We expect our observations and colleagues research could afford ground for further study and future protection of these animals in their natural habitat and enclosure conditions.

Adult individuals of the toad-headed agama are middle-sized lizards (their total length can come up to 24 cm, including their tail). The predominant shade in their coloration is sandy, with light-grey spots and milky-white underside. The end of the tail is black, and there is also a black spot on the throat (males usually have a more frank one). Young agamas differ by the lighter throat and orange coloration on the downside of their hindfeet and tail.

Animals have original exterior, with a flat nose and big skin lappets on the corners of chaps (agamas can open these lappets if scared). Skinny combs on the dactyls (to dig into the sand) are also a visible and interesting feature.

Toad-headed agamas are entirely terrestrial. In the summer period, this species prefers barchan sands, covered with thin shrubby or herbaceous vegetation. Sometimes animals form settlements at human-made habitats such as environs of roads. Wintering (typically, from November to February) takes place mostly on the slopes of barchans, where agamas dig up single burrows about 80-100 cm long with the moist chamber in margins and a winter temperature of about 5-12º C. By the way, these burrows are often used as shelters for young individuals in summer, while adults just dig themselves into the sand at night, in rainy weather or in case of danger.

During the warm period (usually from March to October, in exceptional cases – from late February to November), the animals demonstrate their day activity with 2 peaks, which coincide with the morning and evening hours. They spend much of their time, hunting their prey. The basis of the ration consists of insects – bugs, locusts, ants, flies, etc., as well as spiders.

The cold season is the time for hibernation, and then the agamas become torpid (for wintering see above).

Social behavior of the toad-headed agamas is diverse and dramatic, but generally, animals are aggressive and confrontations are frequently observed between individuals of different age and sex. The most notable ways of their communication are opening lappets of skin on the corners of their chaps and rolling tail. The thorough research of the toad-headed agama’s ecology and social behavior is a wide and exciting subject for further studying, due to the deficient state of knowledge in this intellectual field at the moment.

The toad-headed agamas are oviparous animals. The mating period takes place from late April to the beginning of July, and after this, females often make (dig into the sand) 2 sequential clutches – in June and late July. The number of eggs in the clutch varies from 2 to 6, depending on the age of the female. Hatching happens in July and August.

Juveniles have a total length of about 30-40 mm and are closely similar to adults, except a few differences (see above). They usually settle near hatching places and attain their individual territories only when reach 1.5-2 years old (they become nobilous at this age). 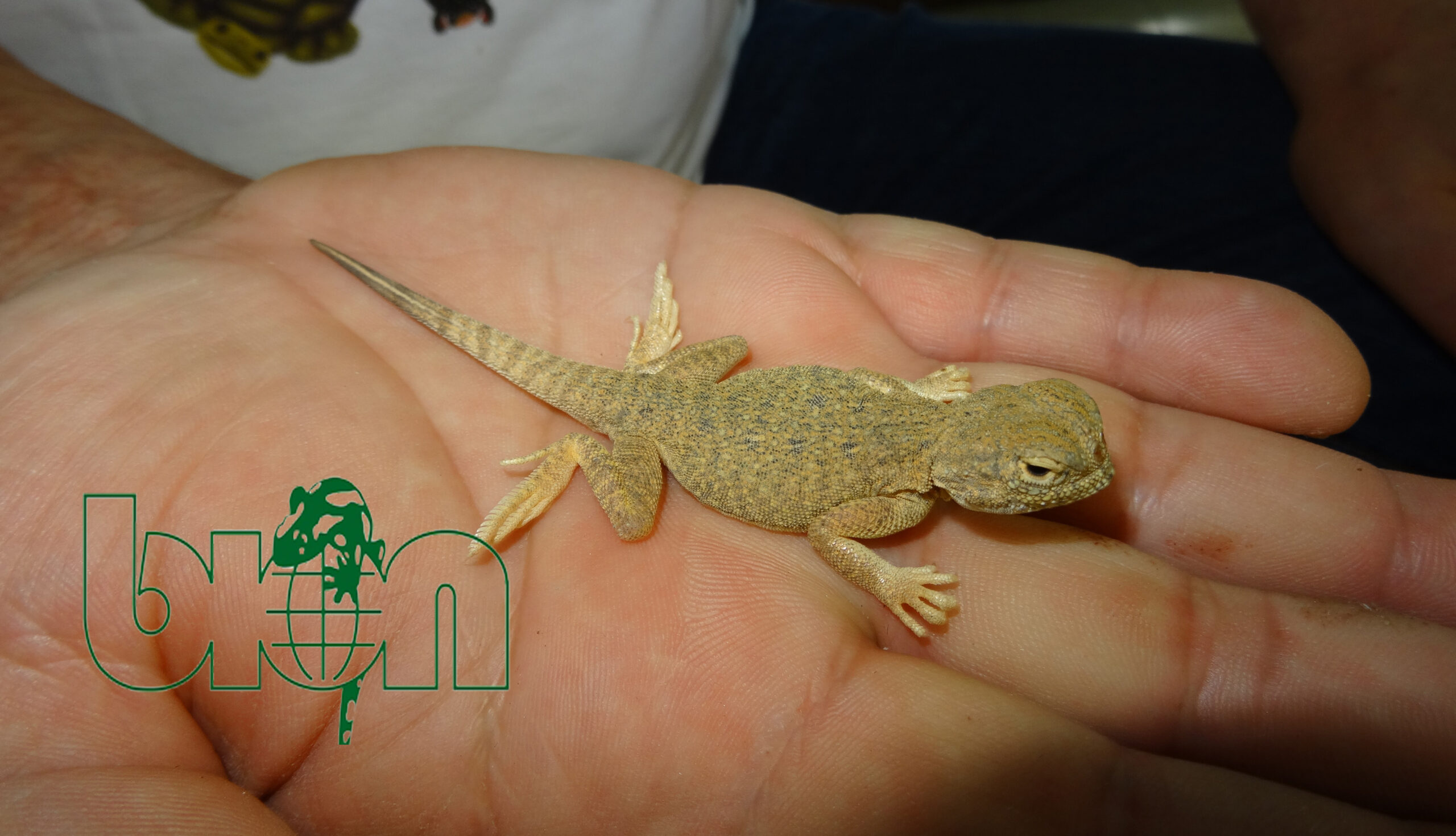 Despite the fact that the toad-headed agamas (Phrynocephalus mystaceus) have remarkable exterior and comparatively small-scale size, this species is still not common in herpetoculture. Therefore, we will share our keeping experience and we hope this could help in some way.

The Toad-headed agama in BION:

Enclosure: we keep adult animals in groups of 1 male with several females, but never place 2 males nearby. The minimal size of enclosure (glass terrarium or plastic container, covered with gauze) is 400x600x400 mm, but generally, agamas feel better in large terrariums.

Substrate: beach sand, a layer of about 2-3 cm. However, a deeper substrate layer is desirable for breeding.

Decoration: as agamas spend much time in a sand layer, they don’t need shelters. Water bowl is not needed, too.

Illumination: a full-spectrum lamp is absolutely necessary. We use ReptiSun lamps for 10 hours every day (except wintering). The day length is about 10 hours, too.

Humidity: about 40-50%, with spraying once a day and good ventilation of the enclosure.

Diet: adult animals receive their feed every second day. We provide them with crickets (4-5 proportioned insects for each lizard) or mealworms (4-5 larvae the same way).

Mineral supplements: we use Calcium+D3 powder at every feeding.

Hibernation: takes only 1 month at the temperature of about 10º C, without spraying and with the water bowl. Small-sized plastic containers with breathing holes are useful for wintering.

8 Nuridjanov, D.A. 2011. The number accounting of the Wonder Gecko, the Secret Toadhead Agama, the Reticulate Racerunner in Central Kyzylkum [in Russian]. Materials of the Republican scientific conference "Actual problems of research and conservation in of wildlife in Uzbekistan" devoted to the 60th anniversary of the Institute: 36-37. Tashkent.