Uroplatus sameiti (Bohme & Ibish, 1990) was separated from another species, U. sikorae, and is one of medium-sized species of the genus. Adults may attain SVL of 110–130 mm and TL of 50 mm (total length 150–160 mm). Total length of juveniles is 70–80 mm. The body is dorsoventrally flattened. The flattened head terminates in a rounded snout. Their eyes are large, lidless, and have yellow sclera with elliptical pupils, suited for the gecko's nocturnal habits. The tail bears an evenly undulating or weakly serrated fringe. Mostly, these animals show lichen patterns in coloring. Until 2006, U. sameiti was considered to be U. sikorae. The distinction between the two species is now well known (http://www.reptilesmagazine.com/Lizards/Leaf-Tailed-Geckos/). The best way to distinguish U. sameiti from U. sikorae is to check the buccal mucous membrane (located at the back of the mouth/throat). U. sameiti will have a uniformly pink or flesh colored buccal membrane while that of U. sikorae will be black (http://uroplatus.info/archives/59). Males have well-seen hemipenal bulges, while females don’t (Svatek, van Duin, 2001).

U. sameiti coloration is developed as camouflage, being mostly grayish brown to black or greenish brown with various markings meant to resemble tree bark, lichens and moss found. U. sameiti has flaps of skin, running along the entire body, head and limbs, known as the dermal flap, which it can lay against the tree during the day, scattering shadows, and making its outline practically invisible. Additionally, the gecko has a limited ability to change its skin color in order to match its surroundings (Selim, 2005).

U. sameiti is an arboreal gecko species endemic to Madagascar, and is found in primary and secondary forests of the island (Ratsoavina et al., 2013). Their activity peak can be observed from late evening and during the whole night. During the night, they venture from their daylight resting spots, and go off in search of prey or pair (Pianka, Eric, 2006).

Due to mass deforestation and destroying of their natural habitat they have IUCN Status indicated as “Least Concern” (https://www.iucnredlist.org/species/193502/8865640). The species is also listed in CITES Ap. II. Therefore development of breeding methods and creation of ex situ populations is extremely important (Dubyna et al., 2019).

Keeping. We keep adult males and females separately or in pairs, at 70*50*50 cm (27.5*19.7*19.7 in) terrariums; babies are kept only separately at terrariums of not less than 30*30*45 сm (11.8*11.8*17.7 in). The decoration of the terrarium includes horizontal and vertical branches of medium thickness, lianas, layers of bark for climbing, hollows, living plants and shards as shelters. Substrate - crushed small pieces of bark with layer of dry oak leaves. Paper with a box of wet coconut substrate as moist chamber is also an option. Water dish is obligatory.

U. sameiti  sitting on a branch – an element of interior decoration of the terrarium.

Lighting. Zoo Med 5 UVB lamp is used during breeding season for 10-14 hours per day; during resting period (2 months) for 4 hours per day.

Temperature. Daytime temperature is +24 – +26 °C, at night – +19 – +21 °C; at the time of winter dormancy – +18 – +21 °C. Heating with 25W incandescent lamp is used only during wintering months to maintain daytime temperature. During breeding season we use no heating source. UVB is important for successful breeding.

Humidity. Humidity is 75-90% both for babies and adults with double spraying during the day.

Diet. Diet for adults contains Turkestan cockroaches (Shelfordella tartara), and crickets (Jamaican field crickets (Gryllus assimilis) and Mediterranean field cricket (Gryllus bimaculatus). Locusts and soft-shelled snails are used as additional food and treats, which are given 1-2 times per month. We offer 2–3 insects per head 1–2 times per week. If the animal shows signs of obesity, the frequency of feeding is reduced to 1 time per 2 weeks.

It is strictly recommended not to use wild caught insects. Sometimes if an animal is still hungry we can offer one or two additional feeding items. We offer soft-shelled snails for females during ovogenesis. All insects should be gut loaded and dusted with vitamin-mineral supplementation every other feeding. Sepia or cuttlefish “bone” powder works well as a source of calcium. Insects are dusted with it prior to the feeding session. We gutload the insects with fruit, greens and vegetables and sometimes bee pollen as an additional source of vitamins and bioactive elements. 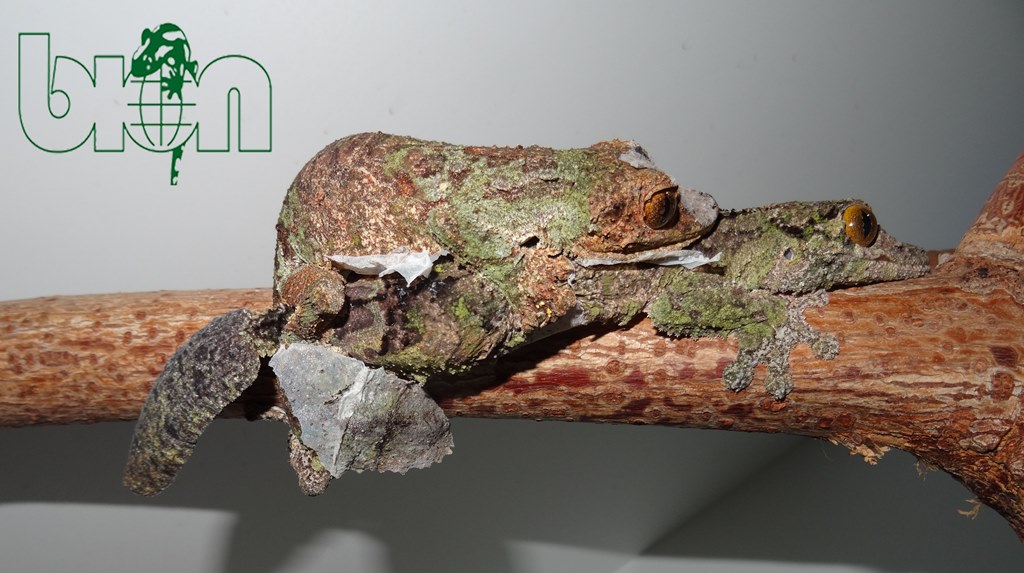 U. sameiti  female making a clutch. 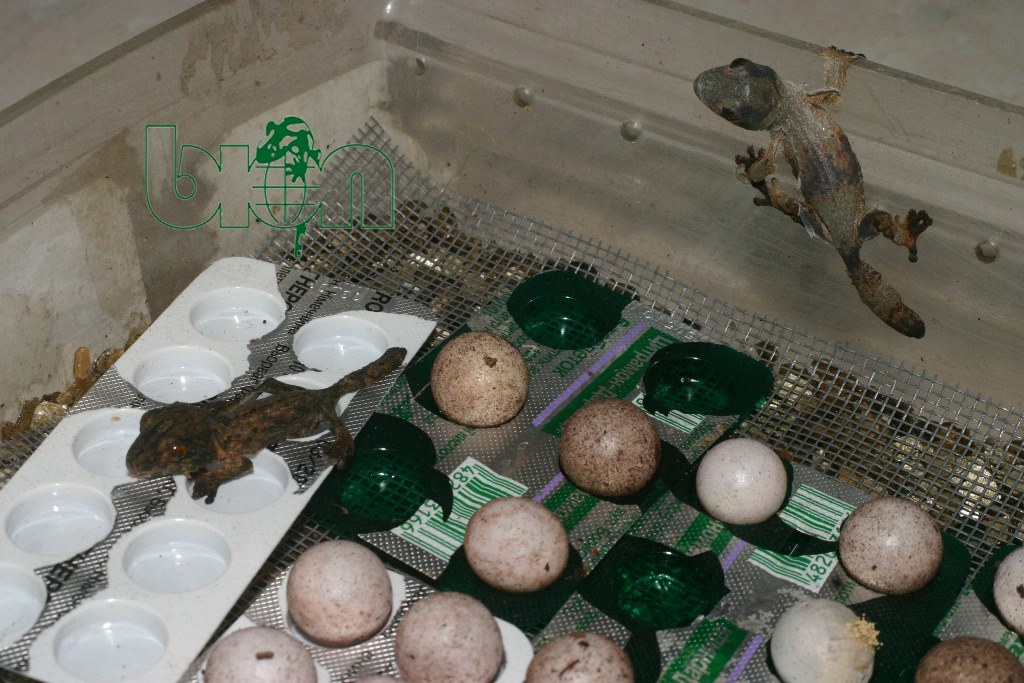 U. sameiti  neonates. One of them is shedding immediately after hatching.