Uromastyx ornata philbyi Parker, 1938 is a medium-sized representative of the genus Uromastyx. Maximum total length is about 34 cm. Tail length is about 71% of SVL on average. There are about 138-193 scales at midbody and 69-96 scales between the inguinal and gular fold. The tail is slightly flattened and consists of 17-22 whorls.

This subspecies, in comparison to the nominate subspecies (U. o. ornata) has a shorter wider tail. Tail length is about 3-4 times the maximum of tail width. On both sides, there are 7-14 preanofemoral pores. During the mating period these lizards no doubt are one of the most colorful spiny-tailed lizards. The deep blue color spots on deep blue background is priority of males. Located on the dorsum are 6-8 yellow crossbands, which fuse to form dark brown-edged eyespots. Ground color is green. Dark brown vermiculation is located between crossbands. 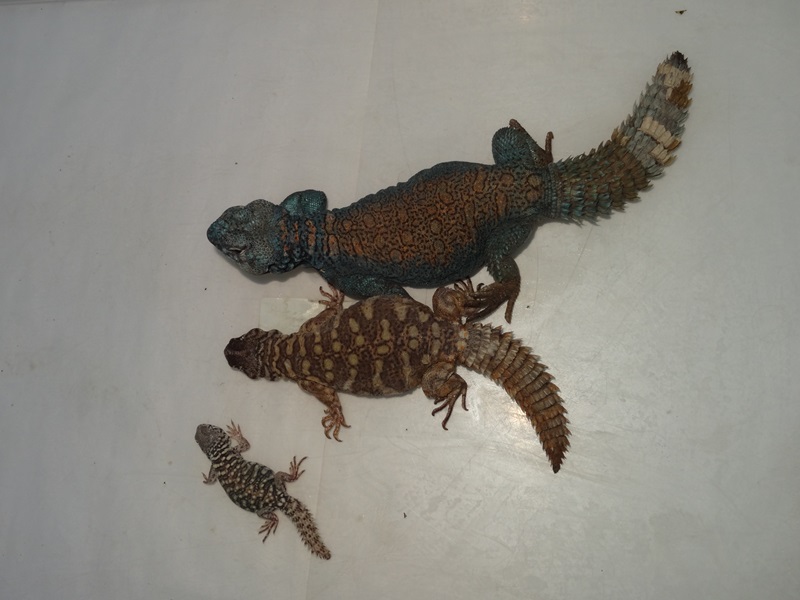 The throat, forelimbs, dorsal surface of the hindlimbs, tail base, temporal and occipital regions may be blue in color (Wilms, 2005). Sexual dichromatism is clearly marked in adults. Males are definitely nicer colored, females colors are subdued and less vivid. Female’s color of the ventral is more uniform in shades of white, cream and grey. The throats and ventral sides of males are definitely more colorful. A fairly good determinant of sex are also femoral pores, which are clearly marked in males. In sexually mature individuals, another method is to identify on the basis of the presence of hemipenis, which in males is clearly marked by two bulges at the base of the tail (http://uromastyx.pl/).

This subspecies is distributed in the mountain ranges of western Arabia, and from the region of Jabal as Sinfa into southern Hejaz. Here they inhabit rock and rubble deserted areas. The habitat is extremely arid (Wilms, 2005; Baha ed Din, 2006).

Typically U. o. philbyi live alone or in small groups, that have not more than one male. The animals excavate their own burrows that can be up to 100 cm deep (Bedir et al., 1994). Relative humidity inside such burrows is 30-60%, temperature ranges from +11 to +34 °C (Wilms, 2005). It is hard to sex them in young age. Sometimes it is helpful to place a torch under the tail base of a juvenile. If you have a male you will see two long dark hemipenises inside. As the matter of fact this method is more reliable as the animals are getting older. So far there are no 100% reliable methods of sexing at early-aged animals.

Keeping. We keep adult U. o. philbyi in horizontal terrariums that should be long enough to provide temperature gradient. We use terrariums of 90*60*60 cm (35 *23*23 in) for a pair (1.1). We provide a layer of coarse sand or pressed loam as a substrate. Decoration includes bamboo steams, stones and artificial shelters (a ceramic plate on stones/2 bamboo trunks) along the terrarium’s perimeter and especially under the basking point. We keep them in pairs since animals of the same sex demonstrate aggression towards each other. On the opposite side from the basking place we make a hill of coarse sand that is lightly moistened during breeding season.

Lighting. Since these lizards are arid and diurnal, high light intensity is needed. We use LED lamps for lighting and a Raptor Solar lamps for heating and UV in one corner of the terrarium. We use them for making basking place above a ceramic plate. UV-light is necessary. Lighting period is 14 hours during mating season and 12 hours at other time except winter dormancy.

Temperature. Ambient temperature should be around +28 - +30 °C at the day and not lower than +22 °C at night. At basking place the temperature is about +50 - +60 °C. A flat stone/ceramic plate is placed under the basking lamp.

Humidity. Humidity level is low (30-50%). We spray sand lightly inside the shelter when female is gravid or  twice a week at other period of time.

Water. Water bowl is placed inside a terrarium daily when a female is gravid and several weeks after egg-laying (until female fully recovers). We also place a water dish twice a month to adult animals at other period of time.

Diet. In the spring-autumn period we provide a salad, including: dandelions, nettles, arugula, basil, hemp, alfalfa, clover, as well as acacia flowers, roses and marigolds. In winter, we give a salad of: lettuce, Beijing cabbage, dill, parsley, arugula, basil, while adding dried herbs and flowers from the spring-autumn diet prepared in summer. 2-3 times a month we give a grain mixture of hemp seeds, lentils, millet, sorghum etc. When offering such grain mixture it is necessary to place a dish with water because this kind of food leads to dehydration and animals may need to restore water amount in their organisms. Animals that are younger than 1,5 years should not be fed with grain mixture at all. Once a week we offer bee pollen during the whole year.

We feed young animals up to 1 year of age daily. Food is placed in a dish. Some individuals may refuse to take food from the dish – in that case we put food just on the bottom of the terrarium. We offer food for adults every other day according to the amount of food eaten. We leave remains of the dried salad in the terrarium as these lizards eat them as well. During the breeding season, depending on the food consumed, we offer food either daily or every other day. At winter, it is mandatory to offer food 2 times a week. Normally we give bee pollen (1 pinch) at this time. Food can be put inside a dish or just on the plate at basking place. 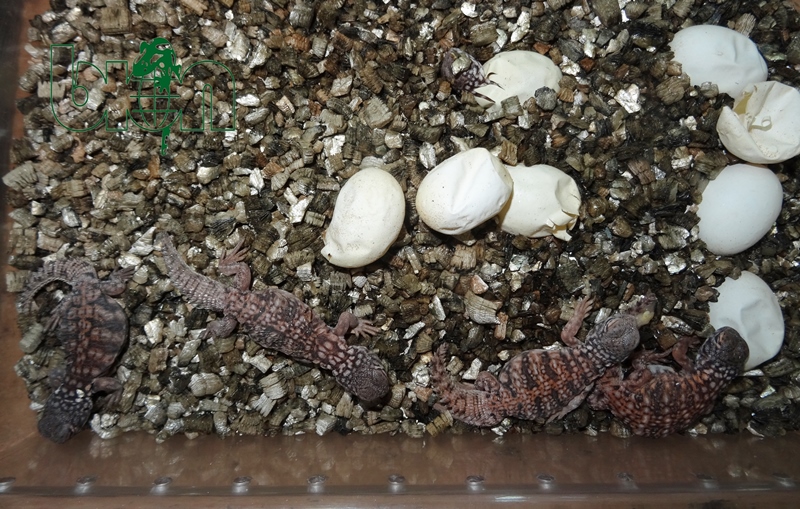 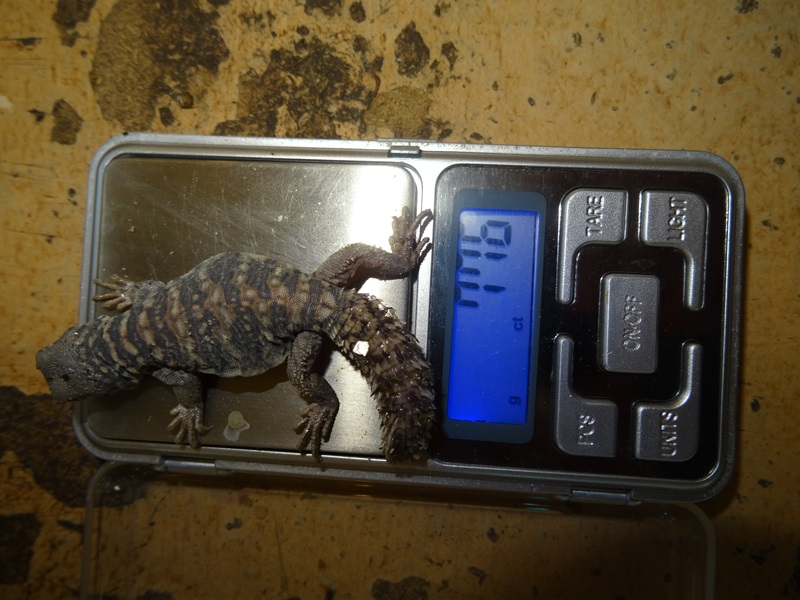 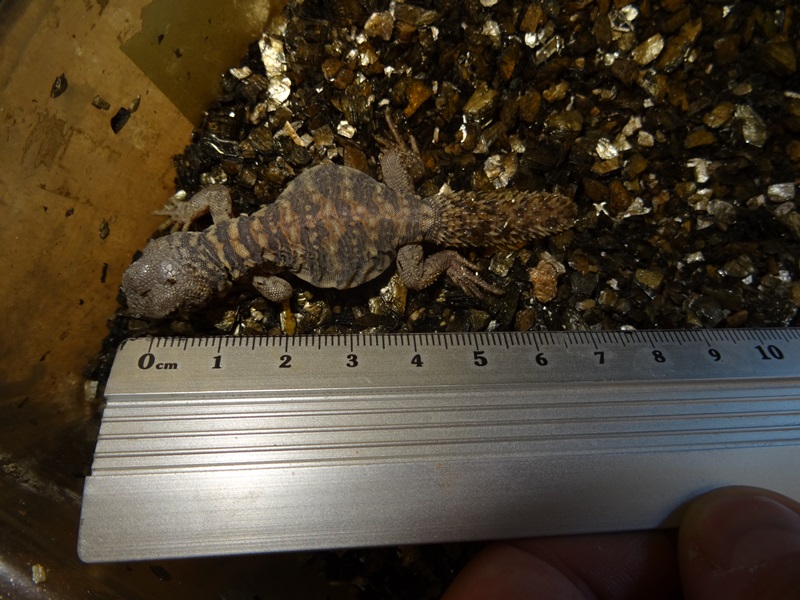 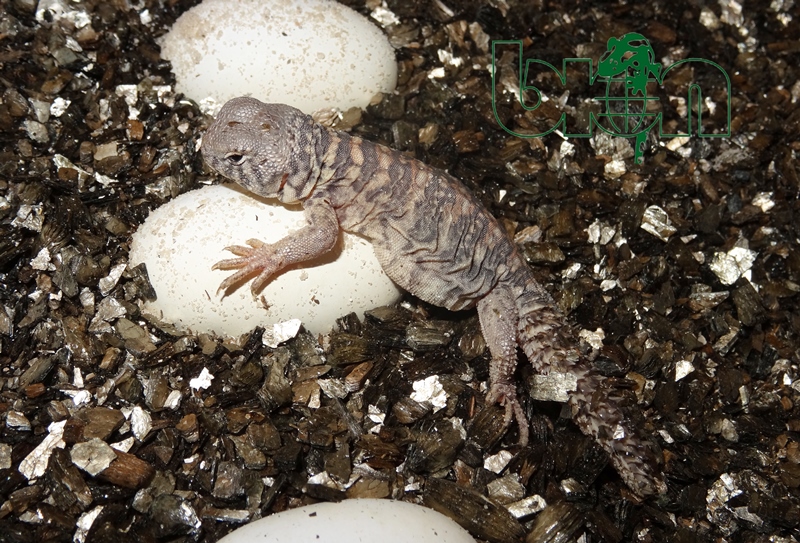 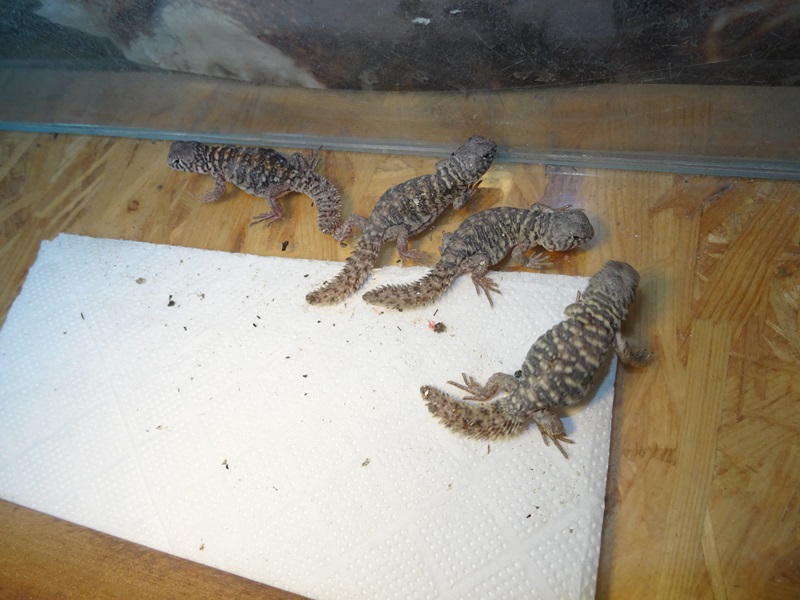