The Philippine sailfin dragon (sailfin water lizard, crested lizard, soa-soa water lizard, ibid) is an endemic oviparous lizard inhabiting the Philippines, except Palawan Island. The species is common on Guimaras and Romblon, but rarer on Negros and Cebu. H. pustulatus exact distribution in the Philippines is uncertain due to hybridization with H. amboinensis. Northern populations are generally considered to be H. pustulatus and southern - H. amboinensis.

They live mainly near the water at tropical humid forests (rivers, riverbanks, rice-fields, etc.) and like to swim. As the matter of fact Sailfin lizards are the ecological equivalent of the Australian water dragon (Intellagama lesueurii, formerly Physignathus lesueurii, Gray, 1831). These diurnal, semi-aquatic lizards spend their daytime sunbathing in vegetation overhanging the rivers and streams. At the first sign of danger they quickly jump down or run into the water until they sink and swim away. H. pustulatus can hide on the bottom for up to 1 hour until it feels safe.

The adults could reach 100 cm, including tail. Body and tail are cylindrical, high and laterally compressed. H. pustulatus has erect sail of skin along the lower back and base of the tail. It can be as high as 6-7 cm in some specimens. This sail plays an important role in territorial display and swimming. Its form and location provide better propulsion through the water when swimming and diving. It also acts in heating and cooling, allowing the lizard to expose a larger body area to the sun to warm up quickly. Flattened toes enable juveniles to run across water. Adults use these structures for swimming. The coloration is formed by mottled dark, olive green and brown colors, often with yellowish patches on the flanks and under the head. They are omnivorous, feeding on fruit, leaves, flowers, insects, crustaceans and small mammals.

The average H. pustulatus lifespan in captivity is 20-25 years and around 15 years in the wild. 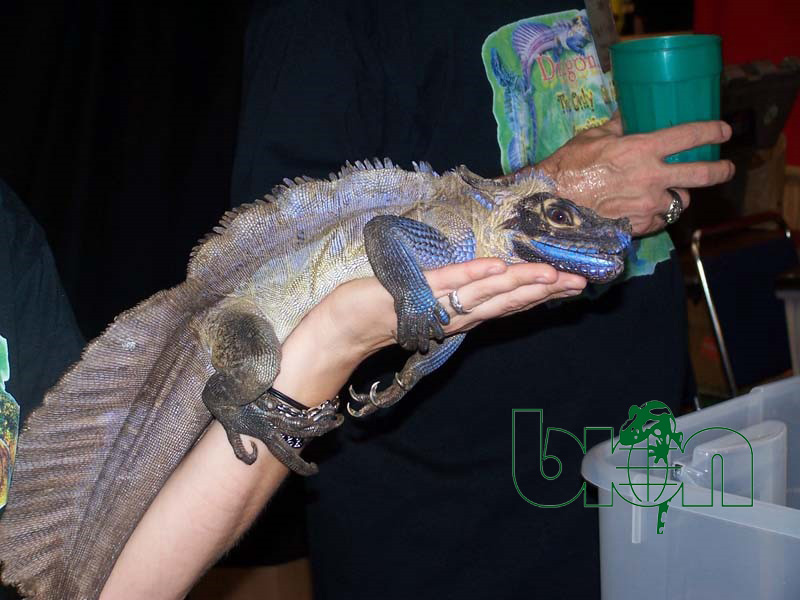 A male during mating season

Females make 1 clutch (2-8 eggs) per breeding season, but in good years they can make several clutches. They lay eggs in shallow holes that they dig in the soil near the water above the flood line. Neonates hatch during rainy season. Their swiftness and agility enable them to escape from natural predators (snakes, birds and fish).

Sailfin dragons are very nervous when disturbed in captivity. These lizards scratch and twirl a bit if captured, but chill out quickly. Hand-feeding will help to gain their trust and reduce stress level (Scott Corning, 2015). No doubt that adult Philippine sailfin dragons are the most spectacular representatives of Hydrosaurus genus and the great display animals for any zoo.

Enclosure. We use large, semi-arboreal enclosure that provides enough space for 3 adult individuals (one male and 2 females). It is recommended space of 200x80x150 cm per one adult individual. As the matter of fact we are using much smaller enclosure right now but planning to put all group at large and beautiful facility in a couple of months. We use bark chips as a substrate. Other substrates (peat, soil mixture or clean sand) can also be OK. They hold moisture and create humid environment, which is essential for proper shedding (Scott Corning, 2015). A pool with water should occupy not less than 2/3 of the enclosure’s area. Water depth should be not less than 30 cm. Sailfins often jump into the water from significant heights and water should amortize the fall and prevent lizard from serious injuries. Decoration includes horizontal logs and driftwoods installed above the water.

All enclosure sides should be provided with visual barriers to prevent animals from rostral damaging.

We keep juveniles at 120x50x70 cm (47x20x28 in) enclosures with logs and driftwoods. Pool is also much smaller than for adults. We use no substrate.

Lighting. We use simple fluorescent lamps for lighting. UV lamps are obligatory. Day lighting is provided 12/12.

Heating. We use “Raptor Solar” 80W lamps for heating.

We got breeding stock (0:0:3) in 2013. The lizards were 1.5-2 months old. Later they appeared to be 1 male and 2 females. As they were growing up one female became dominant and showed  aggressiveness towards another female and male. She was separated from the group until sexual maturity. Then this female was reintroduced to the group and never demonstrated aggression again. Females began to make unfertilized clutches at the end of 2016. After completing the process females quickly eat unfertilized eggs. The age of sexual maturity is 3 – 3.5 years. Breeding season lasts from February to July. 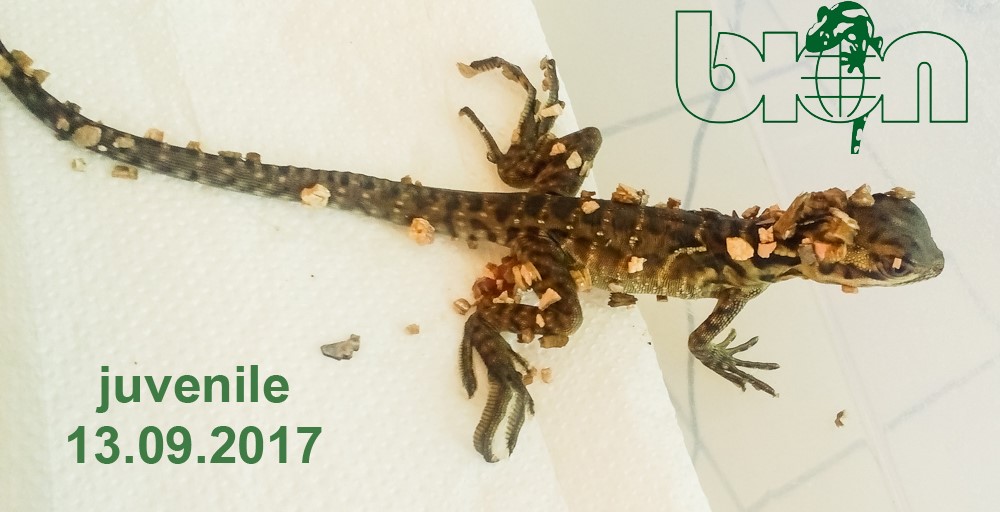 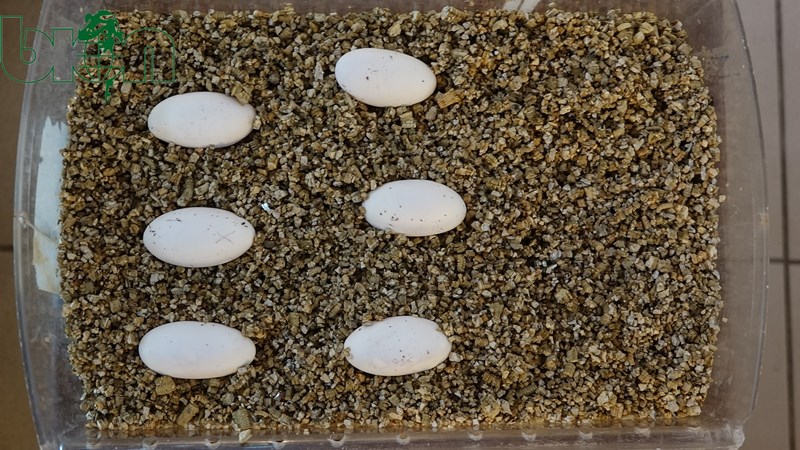 On 21.02.2018 one of our females made her other clutch of 6 fertile eggs. Average weight of the eggs was 13.2 g. All eggs were put into the incubator with the conditions described above. The other female seems to be gravid as well.