Indian star tortoise (Geochelone elegans) inhabits south-eastern areas of Pakistan, India (from Odisha state in the east to Sindh and Kutch states in the west) and Sri-Lanka. They prefer dry lowland areas and scrub forests, artificial gardens and grasslands. Due to their popularity in exotic pet trade, these tortoises’ protection status was upgraded to CITES Appendix I in 2019 (threatened with extinction), giving this species the highest level of international protection from commercial trade.

Also this species is listed in IUCN Red List as “Vulnerable”. Size, appearance and personality are the key factors making them popular among hobbyists and valuable animals in herpetoculture. Adult females can have length of up to 25 cm (10 inches), while males are usually under 20 cm (8 inches) long. The most active growth happens in the first 10 years of life. Their average lifespan is about 30 years, but the current record is 55 years in their natural habitat. However some literature resources indicate that they can live up to 80 years in captivity. Adult specimens can weigh up to 6.6 kg.

G. elegans carapace is very convex, with dorsal shields that often form humps. The lateral margins are almost vertical; the posterior margin is somewhat expanded and strongly serrated. Nuchal scute is abcent, and the supracaudal is undivided, and curved inward in the male; the shields are strongly striated concentrically. The plastron is large, truncated or openly notched in front, and deeply notched and bifid behind; the suture between the humerals is much longer than that between the femorals; the suture between the pectorals is very short; the axillary and inguinal sutures are rather small. The head’s size is moderate, with the forehead swollen, convex, and covered with rather small and irregular shields; the beak is feebly hooked, bi- or tricuspid; the edges of the jaws are denticulated. The carapace is black, with yellow areolae and numerous radiating narrow yellow streaks. The plastron likewise has black and yellow, radiating streaks (Boulenger, 1890). The shape of this tortoise is presumed to be specially adapted to naturally assist it to return to a stable stance after it has been turned over, that was proved mathematically (Varkonyi, Domokos, 2006). Despite being very attractive and bright, their coloration patterns help them remaining unseen in scrubs and high grass.

Females are easy to sex due to their considerably larger sizes and much flatter plastrons, while males have a concave plastron shape and are generally smaller. Males have considerably longer tails as well. 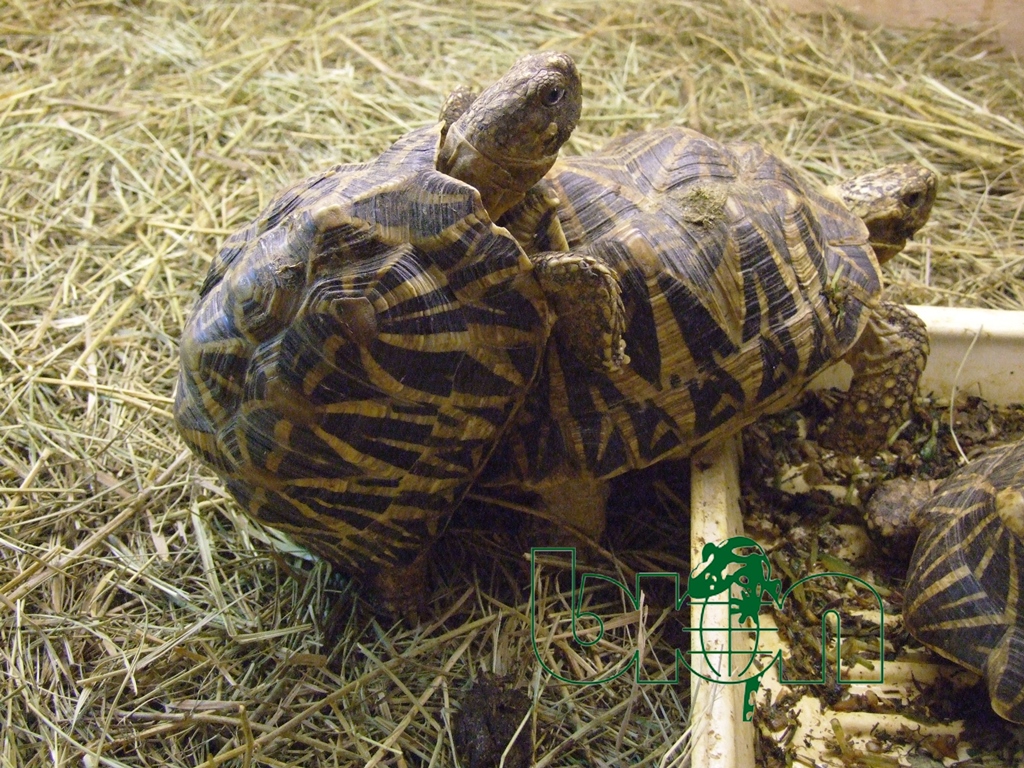 Juveniles have much brighter coloration than adults. As they grow, bright yellow patterns extend into narrow star rays, pointing in all directions from the center of each shield. G. elegans tend to be a little more shy than most of Mediterranean tortoises, so they do not need so much attention. They can be quite sedentary, with a significantly lower walking speed, and can comfortably be kept in smaller spaces than equally sized Mediterranean tortoises. They are intelligent enough to bond with their owners. Sometimes they can bite brightly colored objects, for example painted nails, to investigate whether they are food items. G. elegans is not a good pet for children, they should be handled infrequently.

They are herbivorous, eating fallen fruits, grass, flowers and so on. Sometimes they can consume carrion, but one should not give them any meat food in captivity.

Breeding stock (1:2) was officially imported from Jordan in 2005.

Keeping. We keep adult Indian star tortoises lizards in horizontal enclosures that should be long enough to provide temperature gradient. We use space of 180*50 cm (70*20 in) for breeding stock (1:2). We use hay layer of coarse sand as a substrate. We also provide a box with coarse sand as a nesting place. We use no special decoration. If one wants to use any items for decoration they should be monolithic in order to prevent tortoises from eating their parts and thus harm their digestive tract. We provide shelter for hiding. It is big enough to allow tortoises to turn around inside and not to stuck. Pieces of chalk are also put inside the enclosure. Keeping them in outdoor enclosures in summer will positively affect their health.

Lighting. Lighting period is 12/12 hours. The enclosure is lit up well. We use UV lamps and heat lamps (Solar Raptor) in one corner (hot corner). The opposite corner is “cold”, providing temperature gradient.

Water. Shallow water dish (at least 1 cm deep) is always available in the enclosure. Tortoises drink using their nostrils. If permanent water dish can’t be installed in the enclosure, than tortoises should be bathed in a shallow water bowl (water temperature should not exceed +25 - +28 °C) once a week. A tortoise should be left inside the bowl for 15-30 minutes.

Diet. These tortoises are herbivorous. Their diet should be as variable as possible. Our diet for G. elegans include chopped salad mix (dandelions, nettle, hemp, alfalfa, coltsfoot leaves and flowers, vine leaves, plantain, arugula, basil), zucchini, watermelon, pumpkin, tomatoes, carrots (in minimal quantities). Hay is required all year round serving both as substrate and food due to the high fiber content and the ability to cleanse the intestines. White cabbage should not be given.

We feed tortoises depending on the season and feed intake every 2-3 days. Uneaten food is removed on the next day. 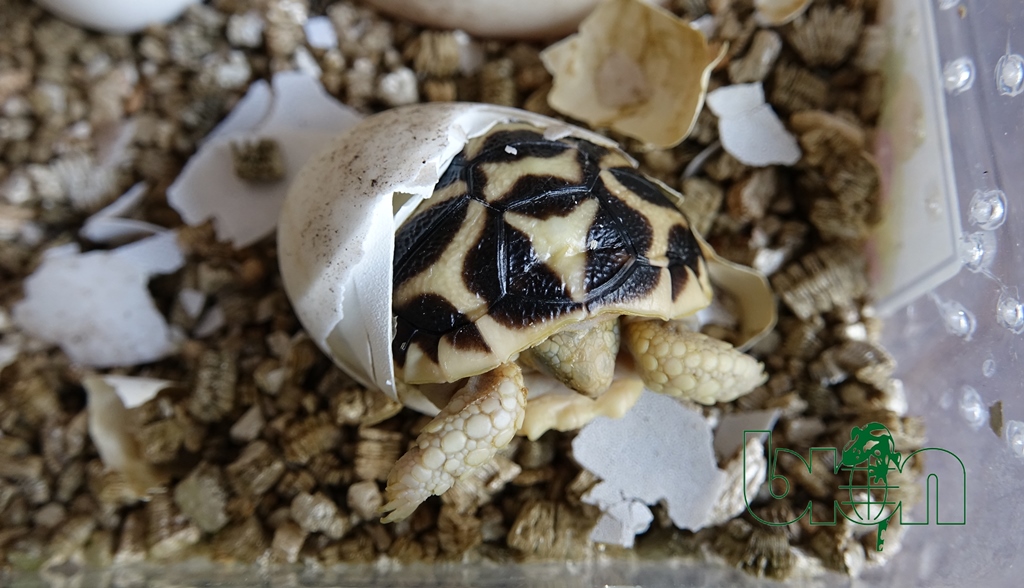 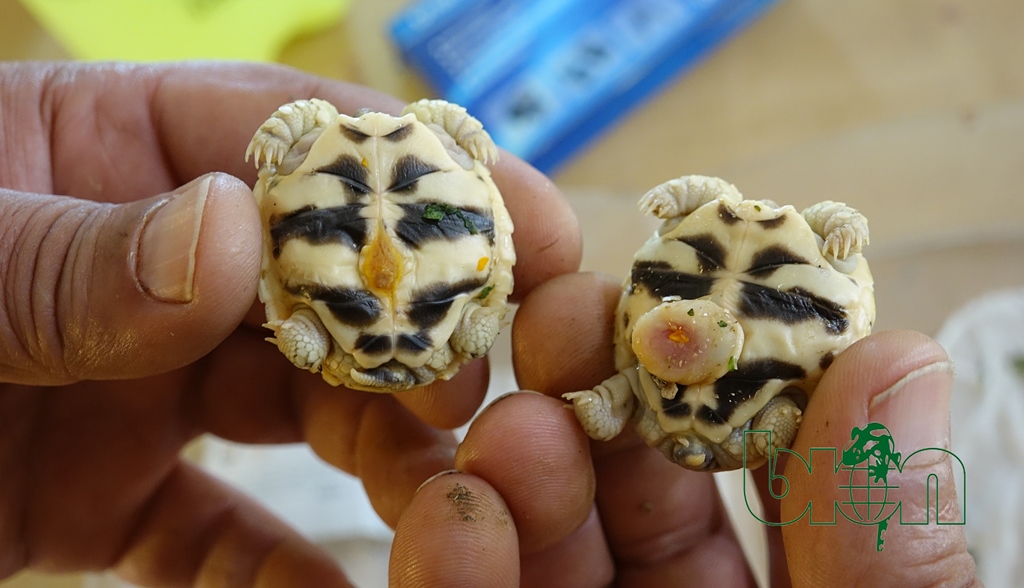